The Rest of the Story

Living just south of Kennebunk Maine as I do, I often heard the story of how a mob, irrate over Jehovah’s Witnesses’ refusal to salute the flag, attacked and burned the Kingdom Hall there on June 9, 1940. As is the case with so many things, there is more to the story.

I always pretty much took the story at face value and had never thought of investigating the details behind the incident until I came across an item related to in on E-Bay.

The Kennebunk incident took place just days after the United States Supreme Court overturned lower court decisions and found against the Gobitis family whose children were expelled from their school in Pennsylvania for refusing to salute the flag. Here is some background on the Minersville School District v. Gobitis case and the only mentions of the Kennebunk incident in Watchtower publications.

On November 6, 1935, Lillian and William Gobitis, children of Walter Gobitis, one of Jehovah’s witnesses, refused to salute the flag and were expelled from the public school at Minersville, Pennsylvania. Their case, pressed in the federal courts, attracted nationwide attention, becoming the test case for the entire country. It was fought up to the Supreme Court at Washington. Seventy-year-old lawyer J. F. Rutherford, president of the Watch Tower Society, personally appeared before the United States Supreme Court and argued the case on behalf of Jehovah’s witnesses. – The Watchtower, 7/15/1955, p 428, “Part 14: Fight Carried into the Law Courts”

Despite “Judge” Rutherford’s best efforts, on June 3, 1940, the Supreme Court, in an 8-1 decision, found in favor of the Minersville School District. The Court later reversed itself on Flag Day, June 14, 1943, in the case of West Virginia State Board of Education v. Barnette. Quoting from former Watergate special prosecutor Archibald Cox, in his book “The Court and the Constitution” (1987), the Watchtower writes:

Professor Cox continues his account: “Persecution of the Witnesses increased. In some quarters, notably Texas, Witnesses were attacked by mobs for their refusal to salute the flag, and they were sometimes held as ‘Nazi agents.'” In Maine, one Kingdom Hall was burned. In one town in Illinois, the whole population “turned out to attack some sixty Witnesses.” – Awake! 6/8/1988, p. 23, “The Principal Victims of Religious Persecution”

Lillian Gobitis mentioned the Kennebunk incident in her story that was published in the Awake! magazine in 1993.

This decision unleashed an almost unimaginable wave of terror. Across the country, it was open season on Jehovah’s Witnesses. People thought they were doing their patriotic duty by attacking us. Within days the Kingdom Hall at Kennebunk, Maine, was torched. – Awake!, 7/22/1993, p 15, “The Courage to Put God First”

So far, it seems like a simple case of an angry mob torching a Kingdom Hall. But there is a bit more to it. This brings us to the item on E-Bay. From time to time I check there for Watchtower related items. One day I saw a photograph up for bid that pictured two men holding Watchtower magazines. The information on it indicated that the two men were Jehovah’s Witnesses who had been arrested for assault with intent to kill after allegedly firing shotguns into the mob that was gathered outside the Kennebunk Kingdom Hall on the night of June 9, 1940, the night that the Hall was torched. I successfully bid on the picture, which is shown below. 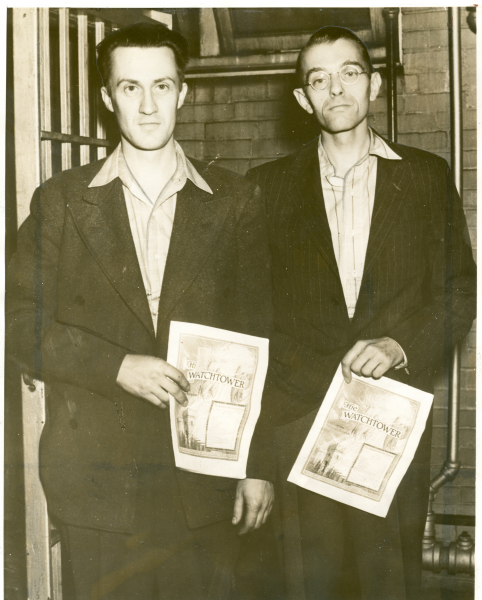 Carrol S. Madsen and Joseph Leathers in the Sanford, Maine jail after being arrested for assault with intent to kill.

Glued to the back of the picture is the original Associated Press release about these two men. 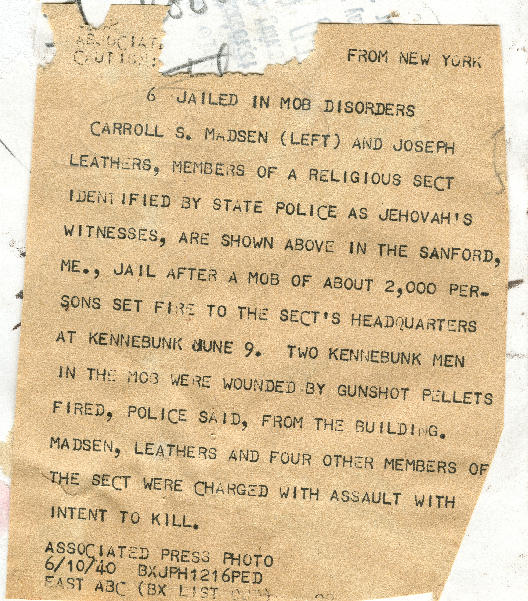 The Associated Press press release attached to the back of the photograph above.

The next year, the American Civil Liberties Union published “The Persecution of Jehovah’s Witnesses”. In this work, the ACLU quotes from Mrs. Gertrude Bobb’s affidavit in which she describes the events leading up to the incident.

The shocking events at Kennebunk, Maine in the early summer of 1940 were preceded by a long campaign against Jehovah’s Witnesses, who maintained in the town a Kingdom Hall.

The culmination of the attack on the night of June 9 resulted in charges not against the assailants but against Jehovah’s Witnesses, who fired some shots from inside the Hall. Nobody was killed or wounded. One member of Jehovah’s Witnesses was convicted of assault with intent to kill and his conviction appealed to the Supreme Court. One man still remains to be tried. Four others were acquitted. Persons charged with burning Kingdom Hall were arrested and tried but all acquitted.

The following is from an affidavit of Mrs. Gertrude A. Bobb, a member of Jehovah’s Witnesses, whose husband was largely responsible for the conduct of Witness work. Mrs. Bobb’s affidavit recounts events after Jehovah’s Witnesses were forced out of a rented hall because of mob violence:

“One day during the last week of September, 1939, at approximately 5 p.m. I went with Edwin Bobb, my husband, and Richard Trask to the home of a deputy sheriff of York ‘County, to tell him of the plans of the French Catholics to break up our meeting, and to ask for police protection. I waited outside in the car while my husband and Richard Trask went inside. In a few minutes they came out and I saw the sheriff swinging his arms and heard him shouting ‘Don’t come here for protection and don’t go to any other deputy sheriffs because they are Legionnaires, too. You’ll get no protection from them.

“We held the meeting without police protection. Kingdom Hall was packed with hoodlums. While I was sitting there a rock crashed in and missed my head by about a foot.

“The following Sunday night we held another meeting and Bible study in the same hall. Albout 8:30, rocks and all kinds of fruit and garbage were thrown through the windows, breaking every window in the front. There were others in the alley crashing windows in the back. We were forced to leave the building. After we left, the hoodlums crashed the doors down and broke all the furniture. The mob downstairs was estimated at about 2,000, among whom there were a handful of Salvation Army men and women in uniform. . . .

“The night after Memorial Day, a mob attacked Kingdom Hall, crashing in the front, breaking the windows and even the walls. I jumped into the car and drove to the nearest telephone to call the state police. In the meantime the hoodlums had returned and two got out of a car with their arms full of beer bottles. As they stepped into the yard to throw them, a shot was fired from the building. The two men dropped the bottles and fled.

“The next day Pat McCab, a state policeman, told my husband that our lives were in danger. He said he was telling this to us because he was afraid the whole thing was getting beyond the point where the state police could control it. My husband told him we would stick it out and protect Kingdom Hall even if we were to be shot.

“On Friday night, a large car’ swung out from the road heading right for our front doors. When they were several feet from the doors, we switched the lights on. They quickly swerved out into the road again and drove around in circles in front of the hall. I went out to take their license number. At first they warned me to go back into the house but when I wouldn’t leave, they tried to run me over.

“The next night, June 7th, our service meeting had just been completed when a hail of rocks hit the building in the rear. But when we got back there, no one was in sight. We called for an officer in Kennebunk but we couldn’t get one. We heard that a mob was threatening to tar and feather us. So we wired the Governor and the Attorney-General of Maine, appealing to them for protection. The Governor was out of town and we received no answer from him or from the Attorney- General. We made preparations to protect our lives as well as Kingdom Hall.

“On Saturday about eight cars of hoodlums began circling the hall. A weird light was thrown across our back yard and the field alongside of the hall. We later discovered it came from the home of the brother of the man who got shot, Mr. MacDonald. These cars would come up almost to the front porch but they only stayed there a moment and then swerved out into the road again. This sort of thing kept up until 2:30 in the morning when a car pulled up in front of the Kingdom Hall and three men got out and started for the Hall. As soon as the rocks started to fly, I said ‘Lights !’ Then I heard gun-fire but I couldn’t tell how many guns were fired.

“A little later the state police came and reported that two men were hurt and in the hospital. They took our names and addresses and the guns, and left. About 4:30 we decided that the mob would be after us, so we started to get our car which was about a mile away. The state police picked us up, telling us we were under arrest. They also picked up two others who were just leaving the hall to go to a friend’s house.

“Later the police said that the women had been taken into custody for their protection but that the men were under arrest, one charged with assault and attempt to murder and the other with being an accessory. Mv husband and I were put in the same cell. A little later the father of one of the boys that was hurt came up to our cell and said, pointing at Eddie, ‘I’ve got you where I want you, you fat bastard. You got my boy and I’ll get you the minute you get out.” He turned to me and said “I’ll get you too. I’ll drag you through Biddeford and make you salute something.’

“The police later told us that the mob was very vicious and that our lives were not worth a nickel out in the streets. I later learned that six of Jehovah’s Witnesses had been arrested and charged with assault and attempt to murder.”- The Persecution of Jehovah’s Witnesses, American Civil Liberties Union – January 1941, pp 16-19 – from http://debs.indstate.edu/a505p4_1941.pdf

Gertrude Bobb’s account confirms the substance of the Associated Press release. On a personal note, I knew the Richard Trask that Mrs. Bobb mentions, first when he was in the Rochester N.H. congregation and later when he moved to the Kittery Maine congregation. I don’t remember ever talking with him about the Kennebunk incident.

After quoting Gertrude Bobb’s affidavit, the ACLU document went on to relate another interesting event in the history of JWs in Maine:

In another Maine village, North Windham, a member of Jehovah’s Witnesses has been convicted of murder resulting from an unprovoked assault by a garage man to whom he had tried to play phonograph records. The garage man threatened and struck the Witness with a tire iron and in a scuffle the Witness, Arthur F. Cox, pulled a gun and shot the garage man. He alleged self-defense. The case is on appeal to the Supreme Court. – The Persecution of Jehovah’s Witnesses, American Civil Liberties Union – January 1941, pp 16-19 – from http://debs.indstate.edu/a505p4_1941.pdf

Another old-timer that I knew was supposedly with Cox when this happened. I’ve heard a couple versions of what happened to Cox after this. If anyone has any more information on Arthur Cox and this incident, please let me know.